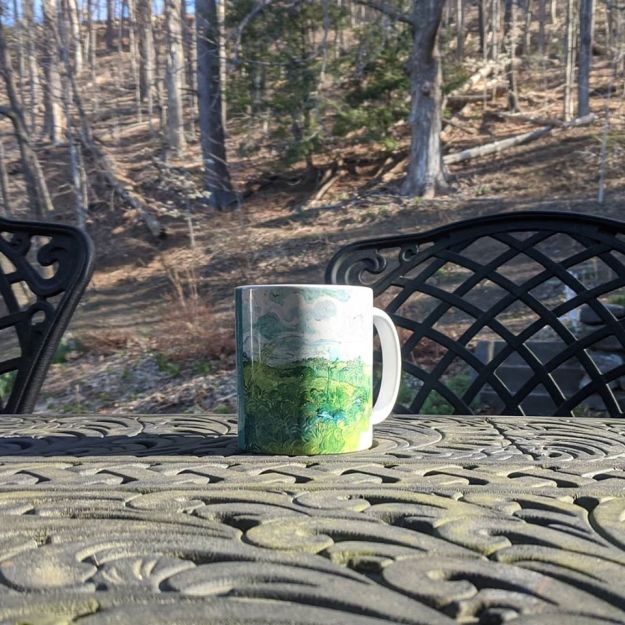 Hello and Welcome.  Hold on, I’m going to grab a few dry cushions to sit on as the chairs are wet.  Ignore that white stuff coming out of the sky as I get you a nice large mug of ultra-strong dark roast,a cuppa tea, a hot cocoa or other beverage.  Yeah, that white stuff is only sticking to the roof of cars and other surfaces like that, but it shouldn’t be too bad out here as we sip our coffee and chat.  Oh, where are we?  You may be able to tell from the (newish) photo that we are in New Hampshire this morning, sitting at this very table!  Yeah, I know, it is now covered in white, but…

This was the second day this week that there was snow in the morning.  I think it was Tuesday (Monday?) that there was actually a covering, even on the roads, but it had all melted by noon.  We had one or two warm days last week, but a little cooler than normal.  It looks much the same this week.  Odd – we had a much more mild winter than normal (“warmer” and far less snow) but the spring is cooler and wetter than usual.  The seasons are just wonky…

The theme of this week is work.  After the 28th day of work this week, which was Thursday, the same question was brought up during three different meetings – With most of the world not working, why are we so, so much busier than usual?  Everything is very top priority/emergency and needs to be done NOW and there is much, much more of it than I have ever seen.  Every day seems like a week (why I said the first four days = 28 normal days).  Yes, I am very thankful to be working, and I am getting a lot accomplished, but, wow, if this continues I will be burnt out before June.

If you read my Smile post of Monday, you may know some other things I have been doing.  I have started a Physics course.  It is the Teaching Company.  It is not Calculus based, so very frustrating in ways since it can only scratch the surface on even the simplest subjects.  I need to find a good, in-depth Physics course that is not only Calculus based, but assumes the student understands Differential Equations.  In my adult life I have discovered that even the easiest concepts are made so much clearer when Diff-E-Qs are used.

And to prove my nerd-creds, you may have also read that I am watching the Star Wars movies in order.  I do not have time to binge watch, so I am taking two days each for the movies, so I am only up to The Empire Strikes Back.  The entire reason for this is I just picked up a Blu-ray for The Rise of Skywalker and want to see it in context.  OK, there were some finger prints on A New Hope so the sound dropped out for two or three minutes before I cleaned it – I was able to speak all of the parts exact, to the letter, so maybe I don’t need the refresher ;)

I did more running around this week than I have in the last month combined.  I went to the grocery story, the Post Office twice (I have a PO Box), the pet food store, a beer store (I ran out of local craft beers a month ago and do not drink big national brands (or international) .ever. – I picked up one 4-pack….) and picked up a to-go pizza.

With dog walking, running, exercise and normal things like eating, that did not leave much time for anything else – I blogged less this week than normal.  OK, most of the ultra-business was because of work…

(Click here if you do not see the video below)

Anyway, I should get up and do some stuff – it is time for a dog walk, and I may record some music today.

Thanks for stopping by!  If you have a coffee post, I will try to stop in and read, but I can’t promise – I really haven’t been getting to many over the last few weeks :(

The coffee share is hosted over on Eclectic Alli.  The link to join is here.