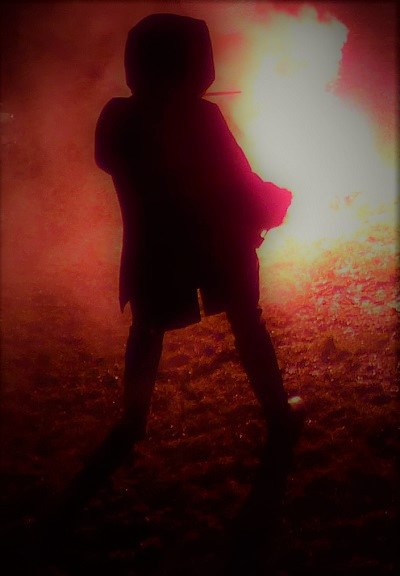 The tests had been phased out with the coming of Common Law, but The Church took Robert the Newcomer’s case and prepared a trial by cold water. Some argued that he was freeman so trial by fire would have been more appropriate, but nobody argued that a trial of God’s will was better in this case than using the King’s Justice.  Not only was Robert a relative stranger to the parish, thus called “the Newcomer”, but all agreed that he had behaved in the most peculiar ways. Several witnesses claimed that he had performed black magic.

Unfortunately, the trial by water did not go as planned. Robert immediately sank out of sight, thus proving his innocence, yet when they went to retrieve him before he could drown, he could not be found. Assuming he had drowned, they dredged the water, yet no body was found.  They searched for days, but came up empty handed. An appeal was sent to the archbishop who proclaimed Robert the Newcomer guilty of witchcraft and stated that Satan himself must have retrieved his servant rather than have his guilt proven by floating on the cold waters.

The county records show that Robert the Newcomer was burned in effigy on the night of October 24, 1219 and proceeded according to standard practice. The records also show that what later came to be called “burning at the stake” was not a common practice for men during our period of study, being considered a woman’s punishment.  The records further state that charred human bones were discovered in the ashes thus proving the righteousness of the fire, with the clergy believing that God was more powerful than Satan, thus sending Robert to the pyre. The official statement was that no one could escape God’s justice. Modern scholars believe this was used as an example to the common folk to try to keep them from trying to escape punishment.

Local legend talks about this case in very different terms.  The burning of Robert the Newcomer’s effigy was seen as almost a public holiday, with revelers gathered around a large bonfire drinking and making merry.  Some declared that the revelers were witches themselves and called Robert’s pyre as a “balefire”, a meeting of witches around a  large open fire in which they could celebrate their so-called “misguided religion”, that of witchcraft. The tales tell of hooded witches waving wands and of human sacrifice.

A more interesting case is of William of…

“Bob, can you come here for a minute?”

“You spent some time in early thirteenth century England, didn’t you?”

“Yes, over a decade as part of my research.  Why?”

“What is the first rule of Time Travel?”

“To leave no record.”

“Right. There can be nothing in history or archeology to show that you made the jump. Those who disobey are treated most harshly. Most harshly indeed…”

“Look at this study. Does “Robert the Newcomer” ring any bells?”

The cult of The Newcomer persisted for years, with hooded figures dancing around the balefires across this area of England.  Many talked about the strong magic of the founder, Robert. Others whispered about Robert’s true fate. As his effigy was burning, Satan had sent Robert’s still living body into the flames. Even during the rituals taking place centuries later, many initiates claimed they could hear echoes of Robert’s screams.

This was written for Sue Vincent’s #writephoto challenge. Not only did she provide the photo prompt at the top of the page, but also a keyword, “balefire“.