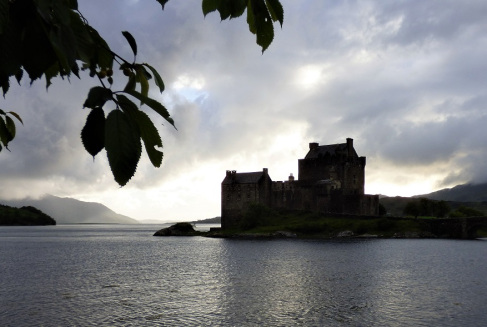 “…and on a day, so they say, the Fairy King will leave his castle at Deep Blue and sail off to Evermore.  The legends tell us that whoever reaches the castle first will then become king or queen and rule Fairyland until it is their time to sail the dark sea to Evermore.”

I remember my great-grandmother’s words well, though I was no more than three.   After she made her own journey “to Heaven”, or so my mother told me though I secretly believed she went to “Evermore”, I heard no more about the Fairy King nor his castle at Deep Blue.  Yet, when the clouds towered over the water, full of lightning and thunder, or when the fog rolled in, I could make out the craggy towers exactly where great-grandmother told me the castle should have been.

That was oh so many years ago.  Now I am far older than she was when she made her final journey.

Yesterday I told my own great-great-granddaughter about the Fairy King and his castle at Deep Blue, only I told her that he had already left and that I would find it first to be Queen at Deep Blue.  She laughed, the way four-year-olds do.  I laughed as well.  I have no idea why I said it, but there it was, out in the open, a silly old lady, still believing the ancient tales that were forgotten before the first automobiles drove to these shores.

Only now I see it across the water, just as I was told it would be.  Just there.  See it?

A row boat is on the shore, the oars at the ready.  Where did it come from?

With more strength than I knew I still possessed, I give a mighty shove and, to my surprise, the boat is soon floating in front of me.  Not caring on iota. I step into the cold, clear water, getting my feet and skirts wet as I wade out to it.

The oars are heavy, oh so very heavy, but I think I can manage.  At least the water is smooth and the wind calm.

I am a bit rusty, though I have rowed these waters for ages.  The oars misbehave at first, but soon I am able to pull them.  With a satisfied grunt from me and a swish of water, the boat lurches forward.  Another stroke, a little easier than the first, though still hard, and I am on my way.

My back is sore and I turn to look. The castle is closer now, even more beautiful than I had dreamed.

A few more strokes and I will be on the rocky beach.

Just a minute more and I will be the new queen of the castle, Queen of the Deep Blue.