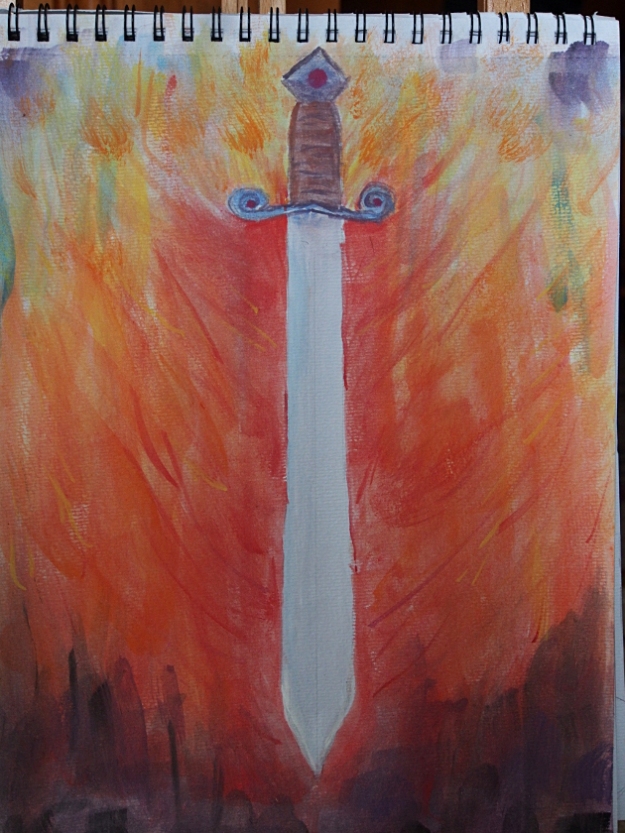 You have a great idea for a fantasy. There are four hominoid races that range from almost good but a little more on the bad side to very good, practically angelic. There are also corruptions of two of the races that are evil.  Of course there are also wizards that really don’t make a race, but are different from the others.  Plus, of course a handful of intelligent and semi-intelligent creatures and monsters, like dragons. They all have their own cultures, religions, myths, personality traits, physical characteristics, ways they use magic (or don’t), etc. And, of course, the world has a rich 10,000 year history plus the “Age of Myth and Legend” which gives another 25,000 years.

So there is all of that detail in your story.  But then we get to the story itself. Hold, though, we need even more detail…

Every 10,000 years, the dreaded Pink Pigeon shows up.  The pink pigeon might seem harmless, but if it comes into contact with the Patriarch of the Putrian people, this person/thing will die.  That might not seem too drastic, except that, not including the Patriarch, the Putrians have seven sexes. Three are needed to be directly involved for procreation – a female, one of the three she-male genders and one of the three he-male genders. The problem is, you can have a group of three in any configuration you want trying to procreate all day long, and, besides having fun, nothing will come of it if there is no member of the eighth gender, the Patriarch alive someplace in the world. The Patriarch doesn’t have to be present, just exist. There is always exactly one Patriarch, for the present one dies when a new one is born.  And if the existing one dies before a new on is born, the race comes to an end.

OK, so someplace near the begining we find out that the dreaded Pink Pigion has returned.  the last time this happened was at the dawn of history and might have been the event that created history in the first place.  So what do we do?

You’ve written thousands of pages of backstory and dozens of diagrams.  So how do you put it all into your story?

Of course the easy thing to do is to just write some of it out.  When you first see one of the angel-like Lexton people, stop and write a couple of pages about them.  Eesie-peasie.

The problem is, most readers don’t really like to read big blocks of facts/backstory/history/etc.  Funny things, these readers. Yeah, they call that a “data dump”. To some readers it is like cruising the story in top gear at 180 mph (or kph if you prefer) and then shifting down to first gear, bringing everything to a halt. You may try to get the story moving at 180 again, but is the reader there for the ride?

How do you get rid of data dumps?  Yell, I wish I knew! But I do have some tricks. And reading other books can give even more hints.

There is a rich fantasy with many humanoid like species, several intelligent non-humanoids, wizards, thousands of years of history and myth, etc.  If you said “The Lord of the Rings” or “The Silmarillion” give yourself a gold star.

So how does Tolkien handle it?

We may remember Gandalf telling Frodo the history of the One Ring.  So is that it? Can we have a wise or learned person give us these data dumps? In the above story, when the great wizard Bob sends our heroes on the quest for the Pike of Pltrard, can we have him give that history?  Perhaps. It’s still, technically, a data dump.

I do use this device.  OK, I use it too often. I like to have a more involved conversation that brings out other impart things like personality quirks and such. To make it better, you can try to hide the two paragraph data dump in four pages of casual, but needed, conversation. The less it looks like a data dump, the better.  Unfortunately some of mine still look like data dumps…

Still not perfect, but the more we can stretch and hide it, the better. Also perhaps not right for every case.

Another thing that Tolkien does is just not tell us the backstory.

Intrigued by Beren One Hand and Lúthien who are mentioned in The Lord of the Rings?  Tough.  Until The Silmarillion came out, well, you were out of luck.  The stories are very important in the backstory of The Lord of the Rings, and yet aren’t needed. So, even though Pltrard’s great-great-grandmother Iquin raised the Magic Moth that spun the silk that gave the pike its powers, her history and even her part in the story is not strictly needed.  Perhaps just one quick mention of the magic silk and someplace else another mention of Iquin and her Magic Moth. No explanation at all.  And all of the characters know exactly what is being talked about.  It isn’t like you would give a long history of George Washington every time you brought him up in a story about early 21st century America. Or Moses or Jesus or Mohammad or The Buddha. You can even bring up Zeus and people will get it.  So people in the Universe you made will know Iquin. No need to go into detail.

But surely Tolkien does more than that, doesn’t he?

Seriously, it is possible to weave a lot of information into other parts of the story. I already mentioned conversations. There is scene setting. Important information can come out naturally as other action is taking place. Place descriptions. Peoples descriptions (A tall, graceful if somewhat delicate, creature walked in.  She was glowing a soft gold that drew in all eyes. Tlishon knew that it was a Lexton. Never had she seen a more beautiful person.)   You can bring up little tidbits almost out of context early and build on it.  Think of The Black Riders.  We slowly learn what they are, but only after we have a feel for them.  In our fictitious fiction, a mention of a purple python attack without saying what it was early on. Many pages/chapters later showing a purple python. Several pages later someone saying, “Wow! You were lucky to escape, purple pythons can’t be killed, you know.” Etc.  You don’t just sit and give 100% of the information about them in one big pile (data dump), it is spread out, given in tiny chunks.

This is the hard part and where the real magic comes in. You need to be subtle. Sure, sometimes you come out and say, “But if the Patriarch dies without a replacement, doesn’t that mean the entire race of Putrians become extinct?” “Yes, of course.” But on the other hand, the mating rituals of the Putrians can be given by hint and stretched. “Tlishon’s eyes boggled.  Was that really a female Putrian? (early in the book there was already mention that he-male type one merchants were common and all of the scholars in Tishon’s school were the reclusive hyper-intelligent she-male type threes) Tishon couldn’t help but stare. A female? In the open? Liasda,(who we know is a warrior she-male type one from earlier in the book) saw Tishon’s discomfort and laughed. ‘Did you think we locked our females away like the Blobheads do?’ ‘But I thought, since they are rare and essential for, for…’ her face turned red. ‘Procreation? Yes. But they aren’t fragile or made of glass.’ Etc. etc.”  No more mention for a few chapters.  Slowly build.

An aside – Although most modern books are pretty strict in the “limited third person” or first person points of view (in both you can only see and know what one character can see and know), Tolkien occasionally stepped out of that limited third person mode and gave a little straight narration to explain something. The idea would be that Frodo (or Bilbo or Sam or…) is writing his travel journal after the fact, and occasionally puts in things that he learned later.  So this isn’t quite omniscient. Would modern readers of modern works accept something like that, where you zoom out for a minute to tell an important piece of information? How about when setting a new scene? I don’t know, but I have been experimenting with it…

The idea of the last three paragraphs is to teach the reader about your world without them knowing that they are learning. That is the problem with having Gandalf tell too much.  And he wouldn’t talk about some subjects.  The Hobbits know a lot of their own history and share much of the myth of Middle Earth. Gandalf is only needed when there is no other way to present the information. So in our story here, Bob isn’t going to give anything more than he has to, because when he is talking, the reader knows they are learning along with your characters.

Let me put this in a different way. Tolkien created a huge mountain out of a single rock called “The history of Middle Earth”. When he created The Lord of the Rings he broke this mountain up.  There is so much of it that he couldn’t use a huge amount of the backstory, but it is there and the reader can feel it. And then he will drop a few small stones in that have none of the surrounding rock, like Beren. Occasionally he comes across a boulder than can’t be broken up any farther but is needed for the story at hand, so he has a conversation about it, Gandalf giving the history of the ring. But most of the stuff that is needed he crushes into gravel and paves the road across Middle Earth with tiny tid-bits here and there so we soak it up without realizing it, just getting the feel of being there through the story.

I will be honest here, I am terrible with data dumps.  It is something I have been working on for a long time. I think I am getting better.  The Fireborn had a lot of them, but I hope I was able to make it interesting and keep the story moving and didn’t through the story into first gear at 200 mph. I think I did a bit better in The Halley Branch. I am currently trying to smooth them out in my two novellas I am going to put out in a few months.

Oh, just a side note – I’ve read a couple of D. Wallace Peach’s “Rose Shield” books and I love her world building. One of the things that makes it work so well is how much information she gives without it ever seeming like a data dump. Something I am aiming for.