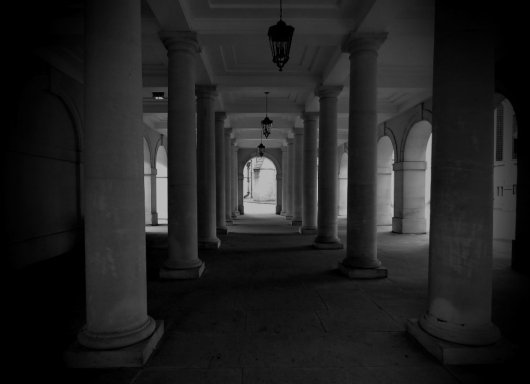 Ed walked through the arch and glanced around.

“Pillars,” he said out loud.

He was in a giant room, seeming to stretch to infinity in every direction.  The unseen ceiling was support by row after row of Doric columns.  Periodically a free standing arch was placed in the middle of the avenues created by the columns.

Ed took a few steps deeper into the room and took his bearings.  The room was very dimly lit, a perpetual twilight.  Uniformity that disappeared in the misty distance.  But what was that?  A faint light from one direction?

Ed followed the imagined light.  Imagined?  Maybe not, for as he went it did grow brighter.

The word “labyrinth” entered his mind.  He had once read that some people believe that the famed maze was just the normal infrastructure of the giant palace at Knossos.   Greek slaves and servants, being from what was at the time a very backwards land, were totally lost and sent reports of the labyrinth back home.

Ed could sympathize.  There was a nagging feeling at the back of his mind that the answer should be simple, he was either too close to see it or not quite bright enough.

Thinking of bright, the light was very bright through one of the arches.

Ed walked around the arch, but couldn’t see it.

He walked back to the “front” of the arch and the light was there.

Only one thing to do.

Ed walked through the arch and glanced around.

“Pillars,” he said out loud.

He was in a giant room, seeming to stretch to infinity in every direction. .  The unseen ceiling was support by row after row of Doric columns.  Periodically a free standing arch was placed in the middle of the avenues created by the columns.

How many times had he passed under the same arch?  Hundreds?  Thousands?  Millions?  When did he enter this room?

Where was he?  The room was not familiar.  That was wrong.  It had the strange familiarity that every hotel room in the world had.  Not that he had seen many.  Or the world, for that matter.

He had just left the country for the first time in his life.

Ed got up and looked out of the window.

The small slice of Britain that he could make out didn’t look very different from the view at night from any other hotel window.

That was one of the things that got him, how startling ordinary everything was.  He had stepped into that magic aluminum tube called a jumbo jet at dusk and stepped off again just a few hours later at dawn.  It should have been another world, like Oz.  But it wasn’t.

Except that some of the people talked like they were from that place through the looking glass, all gibberish even though they spoke English.

Looking at the car park below that window, the one that was identical to what he thought should be a parking lot, he thought about his first ordinary view of the place that was supposed to be magical.

The jet broke through the low hanging clouds.  Ed could see the airport rise up towards them.  His shoulders dropped.  It was like other airports he’d seen.  Nothing special.  He wasn’t sure what he was expecting.  Perhaps an old Concord coming out of retirement to greet him?  Whatever he expected, it wasn’t out there.  He cold have been landing in Cleveland.

“Got a million pounds there?”

“Huh, what?”  Ed felt a little stupid, but he had no idea what the guy in the other seat was asking or if he clearly understood him with his thick accent.  It didn’t make sense.  The entire plane didn’t weigh a million pounds.

“That pack there.  You’ve had a death-grip on it since you sat down.  Maybe the nuclear codes to start Armageddon?”

Ed felt his face heat up.  He hated flying and often hung onto the armrests with white knuckles, wishing there was something more grounded he could hold.  He hadn’t realized he had been using his backpack that way.

In ways the pack did make him a little more grounded.  It contained the last drafts of the three volumes of family history that his great uncle had written out in long hand.  It also contained several hundred pages of notes and drawings.

Ed had actually started to read the old papers Stanley Borrow had written and found himself, or at least in a weird kind of way saw himself reflected there.

Ed couldn’t place it better than that.  It was as if there was a hidden character in every page, one that was never mentioned but always implied.  And Edward A Pulman saw himself as that hidden character.

He was very aware that most likely Great Uncle Stanley had put a lot of his own personality into it and that was what Ed was seeing, but it felt like something more.

“First time over the Pond?”

“Have a good time.  I hope you relax.”  The man turned and headed towards the exit.

That ended up being one of the more normal conversations of the day.  There was the guy outside of the car rental.

“Huh?”  From his reaction Ed figured he must have given him an odd look.

“I’m not saying black is white or anything, just that right is wrong and left is right, right?”

But for the most part, the people were people.  And the roads were roads, even if it felt odd to drive on the “wrong” side.  Trees were trees and grass grass.  It was all too normal.

Ed left the window and lied down on the bed again.  He closed his eyes, though sleep felt a million miles away.  Images of people he had known in his life drifted through his mind.  Places he had been and things he had seen entered as well.  He started to drift into sleep, still 100% aware of his surroundings, but in a weird place that included his dreams as well.

It was familiar dream of a room studded with pillars.

Rows of Doric columns stretched into the hazy distance in all directions.  Faces and places flitted between them.

An answer struck him.

“My entire life,” his dream self said.  “I have been in this room, in this maze in my head my entire life.”

This is part two of last week’s story.

This was written for Sue Vincent’s #writephoto challenge.  See this week’s challenge here.

Here is the Table of Contents (add much, much later).  And the next installment.