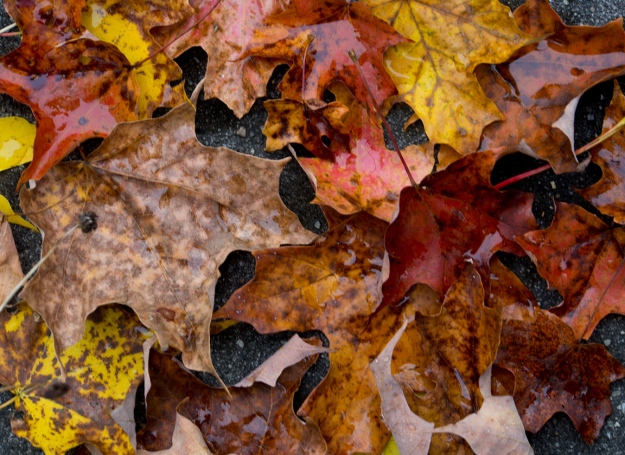 “There are police in the front yard.”

Sara shook her head. Where did that come from? She had been working all morning. Perhaps it was time for a break. She got up and walked to the kitchen.  A large window opened onto the front yard. It was a beautiful late fall day. The trees across the road were glowing rust and mahogany in the morning sun. Her neighbor Ruth was out walking her dog. Sara notice Ruth only had a thin jacket on. The weather report called for almost record breaking temps. They used to call such warm spells “Indian Summer” but she figured that term was now considered racist.

There wasn’t a police officer or car to be seen.  Not that she expected one.  Why had she even looked? She laughed at herself but stopped short. For some reason the way the laugh reflected off of the wall bothered her.  She unconsciously took out her cell.  Her hand was shaking.  She clicked Darren’s name.  Her thumb hovered over the word “DIAL”.    Why was she calling Darren?  Feeling silly she put the phone away.

She sat down at her computer in the little makeshift office she used while working from home. She went back to Steve’s email. What was he talking about?

“They’re everywhere. They’re in the back yard, on the roof of the Saunders’ house. Everywhere.”

Sara looked up. She didn’t know anybody by the name “Saunders”. What was going on?

For some reason she hadn’t refreshed her coffee earlier so she got back up. On her way to the kitchen she stopped in every room, just checking. That she glanced out of the windows to see if anybody was in the yard was coincidence. Of course there wasn’t anybody, but she knew that already.

A new cup of coffee at her side, and sure there were no police around, she was ready to answer Steve’s questions. Her hand paused above the keyboard.  Why did she think of the police? She took a sip of coffee and regretted it. She was already jumpy and this seemed to kick her to a new level. Her head throbbed.

“Dozens of them out there, guns pulled. What do they want? Why are they there?”

Sara jumped up and ran to a window. Nobody. Well, there were a couple of cars and another neighbor she didn’t know by name was walking a little way down the street. But they weren’t stopping at her house and certainly nobody was aiming a gun her way.

After a quick trip to the kitchen she sat back down at her computer. She took a drink of her new glass of water. Her hand was shaking and she splashed some on herself. Damn.  The throbbing of her head intensified.

Without thinking she opened a browser, brought up Google and searched “Eastborough MA November 6, 1985”. She scanned the list. “Real Life Scarface Found in Sleepy Town”. “Notorious Drug Cartel Leader Jimmy Sarento Arrested.” “Drug Lord Comes to Boston and We Got Him”. She clicked on a link to “Killer Cocaine King Captured”.

Although she was just a small child at the time she half remembered the story. Jimmy Sarento led a Miami based drug cartel that had links to most east coast cities. The police had been tipped off that he was visiting a sleepy Boston suburb and caught him without a fight. He was later murdered in prison while awaiting trial. Most thought the killer was a member of a rival cartel. Jimmy had ruthlessly killed dozens, perhaps hundreds, and had many enemies.

Sara started shivering.  The throbbing in her head was almost unbearable.

“Why are they here? Why do they have guns? Someone is shouting something. God, I’m a wreck and can’t make it out.”

Sara jumped up and ran to a window. It was hard to imagine a nicer day. The leaves were weeks past their peek color but still pretty. Nobody was in the yard.  The throbbing was now pounding.

Eastborough was the next town over. She searched the same day but for her town, Lyneville.

There really didn’t seem to be much. Reading the list again she found one story that stuck out. A woman was killed in an accidental shooting. She looked farther. The woman, Anne Osborne, had lived on her street. She searched the name and date. Anne had actually lived and died in Sara’s house. She didn’t know anyone had died there. She was sure Darren didn’t know either. Or did he? Was he hiding it? Was it someplace in the records? Sure, it was 30 years ago, but did it still show up? She couldn’t stop searching, reading. She knew there was something more, something hidden. She had to find it.

There had been a giant conspiracy, a massive cover up, but a few people talked. The whistleblowers were quickly silenced, but some of it was still to be found.  With hammers slamming her head she read confessions, the hidden shouts of guilt and pain.

A wrong address had been given for Jimmy Sarento’s hiding place. A massive force was mobilized. As Anne walked out of her house, half naked, hands above her head, she stumbled. Someone panicked. Once one shot went off, everyone fired. And fired.  And continued to fire. The chief had yelled for them to stop as soon as he heard the first shot, but it was too late.

Sara looked up from her screen. The words were blurred by the tears. She was shaking.

“We have you surrounded.  You can’t escape.  Come out with your hands held high.”

She slowly opened the door. It was early and she still only had a house jacket over her underwear. She lifted her hands and began to walk. She was shaking. Why were they out here? Why all of the guns? She could feel the tie on the belt of her bath robe loosen.  She felt it open. She dared not adjust it yet she didn’t want all of these strange men to see her breasts and panties. She was staring straight ahead, not seeing, just walking. She stumbled. Something hit her shoulder and spun her around. Her ears registered a shotgun blast as her chest shattered. More hits in the arms, legs and torso as she fell. More bullets hit her all over her body and head. More bullets hungrily ate her away as she fell.

Sara jumped up. She heard a noise. Nothing was outside of the house.  The hammers on her head had been replaced with sledgehammers, banging, throbbing.

She slipped into the garage and grabbed a shovel. All she had to do was wait. They may shoot her to pieces, but she wasn’t going without a fight. She would wait them out, but take out any who tried to enter. She stood by the door. She waited, losing track of time.

A noise. A jingling of keys.

Sara opened the door and hit the man standing there with shovel. He gasped, the name “Sara” on his lips. “Who’s Sara?” Anne yelled as she struck him again. He was on the ground. She struck again. She didn’t notice the cars stop.  She struck again.

A man came up and she hit him with blade of the shovel. He fell back. She pounced on him and raised the shovel for the killer blow.

The loud sound of the gun woke Sara. The object ripping through her flesh brought her to the present. She fell to the ground facing the first man. She knew him. What had happened to him? Darren’s eyes were open, but unblinking. His dead eyes stared at her. She tried to shout his name. How had she done this to her husband, her love?

As she was fading a woman came over and stood next to her above Darren’s body. The woman was wearing only an open bath robe. Sara was dimly aware that the lady was talking, mumbling, babbling nonstop.

3 thoughts on “Why are They Here?”